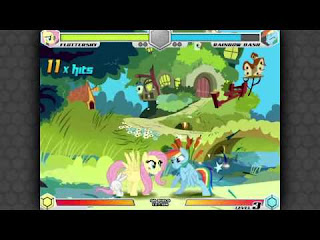 The hype train that has been rolling for My Little Pony: Fighting is Magic has been derailed. Fans of the My Little Pony franchise were thrilled to hear they could play as characters such as Rainbow Dash but Hasbro isn't amused.

Nothing seems magical about this situation.

Mane6, the team behind My Little Pony: Fighting is Magic has been forced to stop development of the game. The development team took to their official website to reveal Hasbro has hit them with a cease and desist letter.

Not only is Mane6 forced to cancel Fighting is Magic, but they've had to remove Youtube videos, Twitch archives and everything else involving the development team and the My Little Pony brand.

Mane6 has tried to reach out to Hasbro to work something out but so far their efforts haven't seen results. Here is the official statement by the team.

We have what for most will be bad news, for us are terrible news, and for a selected few might actually be good news.

We have received a C&D letter from Hasbro's Legal representatives, asking us to cease game development, remove any materials that might contain My Little Pony characters, names, locations or related elements from the sites we control (Our site, our youtube, our twitch), and "cease any further use of [their] MY LITTLE PONY property".

We have attempted negotiating with Hasbro for the continued use of the property in our non-profit, voluntary project, but so far we haven't received an answer. As such, we're complying with the contents of the C&D letter until we receive answer from their PR and/or Legal departments.

We'll keep everyone posted as the situation evolves, but be aware we might not be able to respond to comments and questions due to the delicate nature of the situation.

Thanks for following our project so far."
Posted by Fernando Quiles Jr.