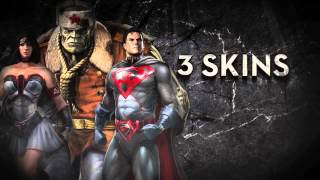 The GAME pre-order exclusive Red Son Pack for Injustice: Gods Among Us is getting some shine in the spotlight. Peep the trailer inside, which reveals Gorilla Grodd in the background of a stage.

GAME has released the trailer for their exclusive Injustice: Gods Among Us pre-order bonus. Pre-ordering at game.co.uk will get gamers the Red Son Pack, which includes skins for Superman, Wonder Woman, and Solomon Grundy. It also features 20 additional missions based off the Red Son story.

Not only does the trailer show off the skins in action, but it also reveals Gorilla Grodd. The DC Comics villain is seen in the background of a stage.