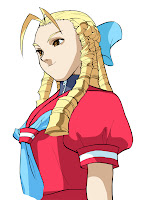 The Street Fighter character polls have wrapped up. Find out which characters fans voted for in hopes that those characters would make it on the roster of future titles.

Last month, Capcom asked fans of the Street Fighter series to vote for their top five favorite characters. This was done to get an idea of characters fans want to see in future games. The full results have been released through Capcom's Japanese blog.

Thanks to Catalyst of EventHubs, the list has been translated.