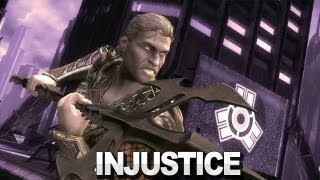 Aquaman is making quite the splash (lame pun intended) on Injustice: Gods Among Us. First came the big reveal, then he defeats Cyborg in the Battle Arena. Now, the DC Comics warrior has a new combat trailer.

IGN has posted a new Injustice: Gods Among Us combat trailer featuring Aquaman. As you can tell by the title, the trailer focuses heavily on the gameplay.

Here we see how Aquaman is able to make use of the stage environments. Also on display are his attacks and a super that attracts a shark.