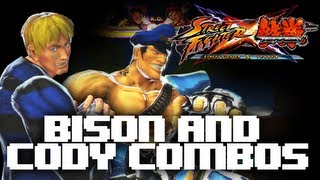 Street Fighter x Tekken 2013 is gaining a ton of steam with the fighting game community. Looking to build off the momentum is Tyrant with these M. Bison and Cody combos.

M. Bison and Cody are two tough Street Fighter x Tekken (SFxT) characters. With the 2013 update, they also make for a solid team. If you needed to be convinced of that statement, perhaps Tyrant can persuade you.

The uploader has posted new SFxT 2013 combos with Ryu's fierce rival and Final Fight's popular deviant. Watch the combos that are so energetic, not even Cody could be bored.