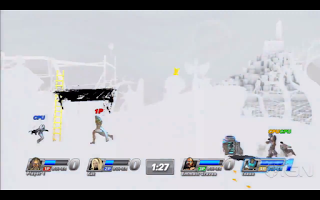 Sony Santa Monica has rolled out some DLC news for PlayStation All-Stars Battle Royale and it isn't costumes and minions. Check out Isaac Clarke and Zeus in action on The Unfinished Swan stage inside.

Seth Killian wasn't lying when he said "exciting" news was on the way.

IGN got the scoop on the upcoming additions to PlayStation All-Stars Battle Royale. Isaac Clarke from Dead Space and Zeus from God of War will be DLC characters. In addition, a stage that mixes The Unfinished Swan with MediEvil is on the way.

All DLC from today's (Feb. 27) announcement will be available on PSN for PS3 and PS Vita on March 19. The prices of the characters and the stage have not been revealed.

Watch the announcement and commentary from Killian below.