It Came From Nintendo: Pro Wrestling

Popular in the days of the NES, Pro Wrestling hit the console back in the 1980’s. It was one of the first wrestling games to actually have an active referee during a match.
The referee would run up to you and do a countdown when needed too. The A.I. was pretty much accurate when it came down to doing its job.
The game even became a fan favorite in the fighting game community because of its gameplay at the time. It held a lot of the key elements for wrestling. It was the second game on the NES to do that.
Read more »
Posted by Kenneth Melendez

Email ThisBlogThis!Share to TwitterShare to FacebookShare to Pinterest
Labels: Fight VG, NES, Nintendo, Pro Wrestling, The winner is you, Wrestling

And you can catch the live stream right here on FightVG.com.

For a complete schedule of the events that will be held at Evo 2011, click here.

The live streams will be posted below on July 29.

Poll: Which Evo 2011 tournament are you looking forward to the most?

NOTE: You can only vote using the full web version of FightVG.com.

Evo 2011 is just three days away and we want to know what tournament will hold your interest the most.

In the top right corner of the site you can vote for the game you're looking forward to the most when Evo 2011 kicks off at the Rio Casino and Resort in Las Vegas on July 29.

Is it Marvel vs. Capcom 3? How about Super Street Fighter IV: Arcade Edition? Do you want to see blood and gore at Evo with Mortal Kombat? Does Tekken 6 still hold your interest? Has Blazblue: Continuum Shift II captured your attention?

Street Fighter: 3rd Strike Online Edition and Street Fighter X Tekken aren't the only Capcom fighters to feature a playable build at Evo 2011. Ultimate Marvel vs. Capcom 3 will make an appearance at the biggest fighting game tournament of the year.

Shoryuken brought word of the game's appearance at this year's Evo.

It Came From Namco: SoulCalibur 2 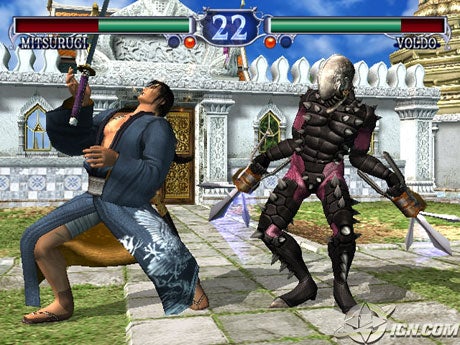 Warriors coming from around the world meet to posses or destroy the infamous sword know as SoulCalibur. This is each character's ultimate goal as they cross paths with there own intentions. It holds dreams, it can be used for good or evil.
You decide who takes control of their destiny.
SoulCalibur 2 was released in 2003 for GameCube, Xbox, and PS2. Each game had their own special exclusive character. Armed with the Master Sword and Hyrulian Shield, Link made his way into the SoulCalibur universe to hunt and destroy the power of the legendary sword. He was exclusively available for the GameCube.
Appearing on the Xbox, Spawn with his Axe as his weapon challenges the might of the Soul Edge.
Last but not least Heihachi Mishima, from Tekken challenges SoulCalibur on the PS2 Version. 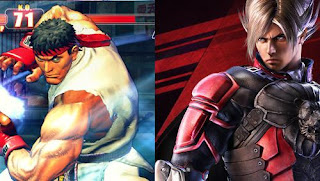 Capcom is in San Diego for Comic-Con 2011 and FightVG.com is providing you with a live stream of what they are showing.

While games outside the fighting genre will be shown, Ultimate Marvel vs. Capcom 3, Street Fighter X Tekken and Street Fighter III: Third Strike Edition will be a major focus.

There will be tournaments throughout the day and Capcom's own Seth Killian is rumored to be on commentary.

See the live stream which is going down right now below. 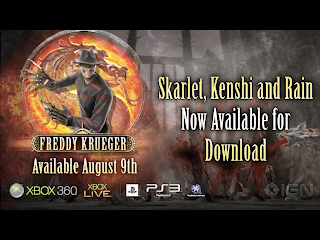 The final DLC character to appear in the ninth installment of Mortal Kombat is none other than Wes Craven's deadly creation, Freddy Krueger.

Krueger slashes his way on the Xbox Live Marketplace and PlayStation Network August 9, 2011. Expect the dream killer to run you 400 Microsoft Points or $4.99. 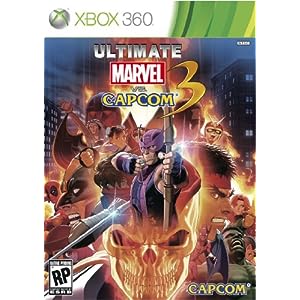 The Ultimate edition will feature 12 new characters from Marvel and Capcom including Strider, Firebrand, Ghost Rider and Hawkeye. Capcom says gameplay will be "re-balanced" and will favor both newcomers and pros.

One feature missing in Marvel vs. Capcom 3 was spectator mode. That will no longer be the case. You will now have the chance to see others do battle as spectator mode makes its return. Other new modes and enhancements will be revealed in the future.

See the Ultimate Marvel vs. Capcom 3 character overview trailer after the jump.

When it "Rains" it pours.

The newest edition to the ninth installment in the Mortal Kombat franchise is now available for 400 Microsoft Points on the Xbox Live Marketplace. Rain joins Skarlet and Kenshi as a DLC character along with the fourth and final combatant who will be revealed this Thursday (July 21, 2011) at a Comic-Con event.

Expect Rain ($4.99) and the latest free character skins on the PlayStation Network later this afternoon/evening.

While NetherRealm won't be having a panel for Mortal Kombat at this year's Comic-Con which starts this Thursday (July 21, 2011), they will have a Comic-Con event.

The event will take place at GameStop in the Westfield Horton Plaza, which is in walking distance from Comic-Con. The event poster (see below) reveals there will be a tournament where you can play as or against all DLC characters. Those characters include: Skarlet, Rain, Kenshi and the final DLC combatant.

See the Mortal Kombat Comic-Con event poster after the jump.


Did we mention that DLC skins are free?
Posted by Fernando Quiles Jr.

It Came From Sega: Sonic Battle

Thousands of years ago, an ancient civilization created artificial soldiers for war in an ancient world.

Many years later in the world of Sonic, the war is long forgotten. Professor Gerald Robotnic discovers a soldier from the ancient civilization and conducts research. A half century later it gets discovered by his grandson Dr. Eggman. Angry because of not being able to awaken it, Dr. Eggman tosses it aside on Emerald Beach.
Sonic the Hedgehog finds the Gizoid alongside the beach causing it to awaken, and the adventure of Sonic Battle begins.
Sonic Battle was released in North America on January 5, 2004 for the Game Boy Advance. The game is a four player all out brawl with Sonic and his friends. What’s cool about the game is that the fights take place in large 3D arenas. The characters themselves are in 2D sprites.

It made the game very unique at that time.
Read more »
Posted by Kenneth Melendez

The purple warrior, Rain will make his return to the Mortal Kombat franchise next Tuesday (July 19, 2011) on the Xbox Live Marketplace and PlayStation Network.

Rain debuted in 1995 as a hidden combatant in Ultimate Mortal Kombat 3.

Since then he has been playable in Mortal Kombat Trilogy, Advance, Armageddon and made an appearance in Deception's Konquest Mode.

For as long as we can remember, playing fighting games such as Marvel vs. Capcom, Street Fighter and Mortal Kombat without an arcade stick has been considered a sin.

If you were anything like us, you'd wish arcades like Next Level in Brooklyn, New York were on every block you passed by.

Well how about playing the bloodiest fighting game ever on this bad boy?

It Came From Capcom: Mega Man: The Power Battle 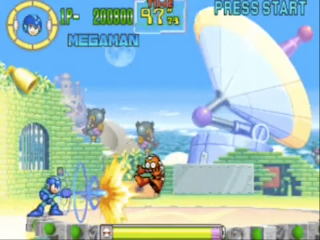 If you’re a retro fan of Mega Man you should definitely try out The Power Battle, especially with a friend. Appearing in Japan in the mid 90s, this fighter brought the fun of Mega Man to the arcades.
Luckily it later released in America as part of the Mega Man Anniversary Collection for Gamecube, PS2, and Xbox. I highly recommend buying the collection if you haven’t done so because not only does it come with Mega Man: The Power Battle, but with nine other retro Mega Man games as well.
The evil Doctor Wily has returned and rebuilt his robot minions from Mega Man 1-7 from the NES and SNES. That’s right, if you’ve played all the original classic games you’ll recognize all the bosses from the game.
All the iconic bosses make their reappearance in this fun Mega Man fighter.
Read more »
Posted by Kenneth Melendez 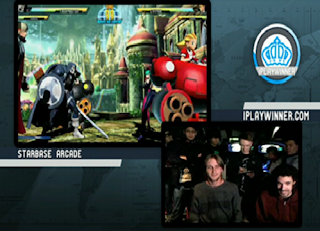 Another week of Starbase Arcade is in the books.

In a result that surprised very few in attendance, F Champ once again reigned supreme, besting KBeast in the Marvel vs. Capcom 3 finals of this week's (July 7, 2011) Starbase Arcade tournament.

See the full results for both Marvel vs. Capcom 3 and Super Street Fighter IV: Arcade Edition tournaments below.

You can choose different packages including the Arcade Challengers pack which includes costumes for Evil Ryu, Oni, Yang and Yun for $3.99.

If you just want alternative attire for everyone you can. The all-in-one pack will run you $14.99.

The characters will be revealed at Comic-Con in San Diego (July 21-24).

Can you figure out who they are?

See the silhouettes after the jump.

The top players of Marvel vs. Capcom 3 and Super Street Fighter IV: Arcade Edition will be there.

Mortal Kombat will sit this one out.

See the live stream which starts around 12:30 a.m. ET after the jump.

Details are scarce, but a basic schedule reveals Super Street Fighter IV: Arcade Edition and Mortal Kombat will be played on Friday (July 29). Marvel vs. Capcom 3, Blazblue Continuum Shift II and Tekken 6 will be played on Saturday.

Each tournament will have the final 8-man bracket on Sunday.

See the Evo 2011 schedule below. NOTE: All time zones are eastern time.

SoulCalibur V: Behind the game (Video)

Before you get to the video, I'd like to apologize for the lack of news today. The internet connection has been piss poor to say the least. We hope tomorrow and the rest of today goes more smoothly.

Put down the ban hammer.

There is a concern that Skarlet could be broken or overpowered but it won't make or break the biggest tournament of the year.

Can't make it to the Super Smash Bros. Brawl Doubles and Singles? Don't worry, FightVG.com has you covered. We will be providing a live stream of all the events taking place in Ridgewood.

Participating in the tournaments will be Vinnie, Will and Ninjalink.

You can see the complete schedule of the festivities here.

Based on the popular anime hit series Mobile Suite Gundam Wing, New Mobile Report Gundam Wing Endless Duel hit Japan for the SNES in the late 90’s. Sadly the game never made it across the states. We missed out on a great 2D Gundam game, luckily there are English patches out there if interested.
When starting the game you are greeted with a intro screen, playing one of the themes in classic 8 bit. Nostalgia will hit as you gaze upon the characters, and Mobile Suite Gundam.
The gameplay is similar to Marvel vs. Capcom in which your able to perform air combos, specials, and you can dash. It’s a really fun game that gets crazy the more you play. Giant robots, projectiles, and laser swords.

What more could you ask for in a Gundam game?

It's Street Fighter in your pocket ... unless you have an iPad.

The successor to the surprisingly successful iOS version of Street Fighter IV has made its way to the app store and Capcom is having an insane discount.