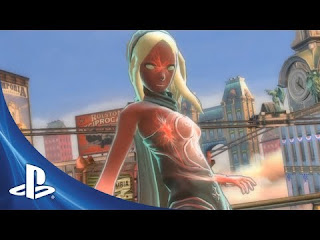 Kat and Emmett Graves are coming to PlayStation All-Stars Battle Royale. Sony has released the DLC reveal trailers and release date for the characters. Peep them inside.

SuperBot is ready to roll with their first DLC pack for PlayStation All-Stars Battle Royale (PSASBR). The developer is serving up Kat from Gravity Rush and Emmett Graves from Starhawk as the first DLC content. Did we mention it's free?

Free is good but how about a release date? Many details surrounding the DLC remained scarce, including its launch. Sony has made the DLC date official. Both Kat and Graves will be available on the PSN Store on Feb. 12, 2013.

Seth Killian has been hard at work promoting Kat and Graves. He hoped to have them ready for SoCal Reigionals, which began today (Jan. 18).

Here are the reveal trailers.