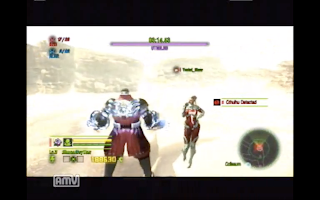 Anarchy Reigns teaches you to expect the unexpected but when Cthulu arrives, the unpredictability factor increases. Watch as things go haywire inside.

It's no secret that Cthulu is the bane of the existence of many Anarchy Reigns players. Whenever the stage boss makes an appearance, top players are summoned. They could be summoned at the most inopportune times like when on the verge of getting a kill.

Cthulu also makes players suffer due to glitches. Just three days ago (Jan. 24) we posted the underwater glitch recorded by Boodendorf. Now a new glitch has been discovered by FightVG's own Miguel Munoz.