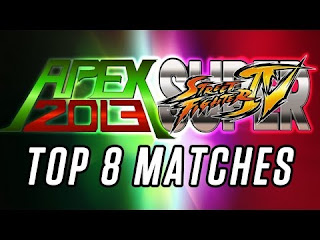 Missed any of the top eight Super Street Fighter IV: Arcade Edition 2012 action from Apex 2013? If so, head inside to see the top eight matches.

Apex 2013 is in the books. The world's best Smash Bros. players came out to New Jersey in hopes of capturing a first place prize. Also in attendance were some of the best Super Street Fighter IV: Arcade Edition 2012 (AE 2012) players from the United States.

Chris G, K-Brad, and Arturo Sanchez are just a few of the AE 2012 rulers that came out to play. Of course only one of the top eight players could claim the tournament. For the full Apex 2013 top eight results, click here.