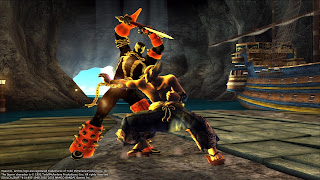 Spawn and Heihachi are coming to both the Xbox 360 and PS3 versions of SoulCalibur II HD. Get more details inside.

In a recent Namco Bandai press release (via Gematsu) it was revealed that Spawn and Heihachi would be making their way to both the Xbox Live and PSN versions of SoulCalibur II (SC2) HD. When the original SC2 was released, Spawn was an Xbox exclusive and Heihachi was a PS2 exclusive.

The Nintendo Gamecube also had Link as an exclusive. It's extremely unlikely (more like out of this world) that Nintendo would allow the Legend of Zelda stalwart to be featured on the other consoles. SC2 HD isn't scheduled for a Wii U release.

SC2 HD will be available this fall.
Posted by Fernando Quiles Jr.