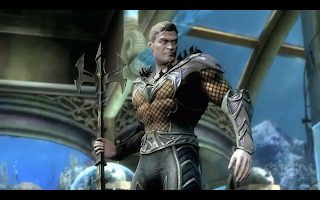 You knew it was only a matter of time until NetherRealm would finally spill the beans and release gameplay footage of Aquaman in Injustice: Gods Among Us. The time is now.

NetherRealm has stopped beating around the bush.

A report from January confirmed that Aquaman would be a playable character in Injustice: Gods Among Us. Since that time, WB Games and NetherRealm have kept quiet on the DC Comics warrior. That silence has met a dead end.

Last night (Feb. 12) Ed Boon announced there would be a "big" character reveal. While the cat had been let out of the bag a month ago, this certainly did not disappoint.

Is Doctor Fate next?