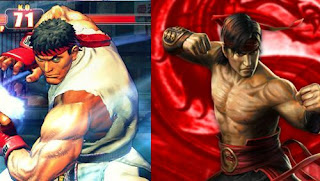 Two of the most highest grossing fighting game franchises have yet to officially merge. That will be no longer if NetherRealm's Ed Boon has his way. Find out why Mortal Kombat and Street Fighter could be crossing paths inside.

Crossovers are nothing new in fighting games. We've seen SNK and Capcom team up and of course Marvel and Capcom are still in business with one another. We've also witnessed Mortal Kombat (MK) and DC Comics in the same realm.

With the Street Fighter (SF) universe crossing paths with Tekken, that leaves one juggernaut that Capcom has yet to do a crossover with. The long anticipated epic battle between Ryu and Liu Kang can only be done through modifications on games such as Mugen.

Not official (though still awesome).

It appears hope isn't lost on a possible game with the two stalwarts. Last February, Ed Boon sent a tweet to then Capcom employee Seth Killian in hopes of getting into "MK vs. SF or SF vs. MK" discussions. One year later, Boon still has his sights set on the crossover (via Twitter).