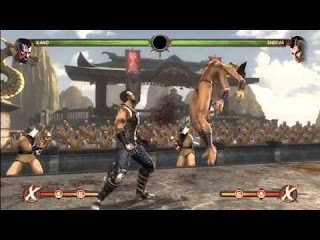 Kano may not be a top tier character, but he's still a force in Mortal Kombat 9. Skynet516 has provided two midscreen combos featuring the seasoned villain.

If your opponent doesn't have a combo breaker, you can do some serious damage in Mortal Kombat 9 (MK9). Skynet516 has been working on MK9 combos since the game was released and has been providing damaging results since that time. His two latest videos add to his impressive collection.

Kano may not be the first character on your mind when it comes to competitive play, but he can still be used effectively. The Australian bruiser has been with the MK series since the very beginning and can still deliver solid blows.

Check out these 42-percent and 37-percent combos.