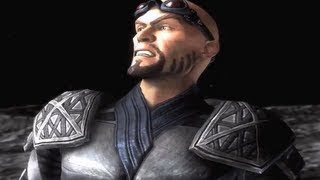 General Zod has been officially banned in the Injustice: Gods Among Us tournament at Evo 2013. The game's recent 1.05 patch will take effect at the event.

Much to the chagrin of Faora, General Zod has been banned from Injustice: Gods Among Us tournament play at Evo 2013. The event's head honcho Joey "Mr. Wizard" Cuellar made the announcement through Twitter.

Despite blackballing the character this year, the 1.05 patch that was released today (July 2) will be in effect. The patch has added some gameplay fixes and character changes so its inclusion at Evo 2013 should be received with little surprise. For the patch notes, click here.

While Zod was released just 10 days before the biggest fighting game tournament of the year, there are still concerns over Scorpion's status. Scorpion was released to the public on June 11 and has since been a nightmare for many in the fighting game community (FGC). Top players such as CDJr have expressed their desires to have him banned in future tournaments.

As it stands, Scorpion will be allowed at Evo 2013. Should a last minute ban occur, it probably won't have an impact on most players since there was a substantial number of signups before the character's release. At this point, however it may be too late. Despite the worries, Chris G was able to pull off a CEO 2013 first place finish using Green Arrow.

Yes, we are using the new Injustice patch, but Zod is banned.
— Joey Cuellar (@EvilMrWizard) July 2, 2013