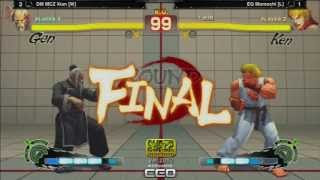 If you missed out on the CEO 2013 grand finals of Super Street Fighter IV: Arcade Edition 2012, then you're in luck. Should you happen to want an encore, you're also sliding down a rainbow with a leprechaun because the replay is inside.