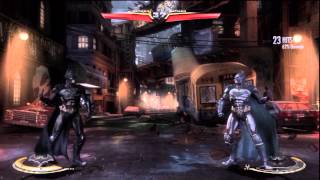 Too much Batman? Nonsense. More combos from the Injustice: Gods Among Us demo have surfaced and the man behind the black mask, suit and cape is doing the damage once again.


Skynet516's lab work in Injustice: Gods Among Us is quite extensive despite only having access to the demo. This Mortal Kombat 9 enthusiast has posted two new Batman combos for Injustice. The first combo deals 62-percent damage while the second combo causes 70-percent.
Posted by Fernando Quiles Jr.