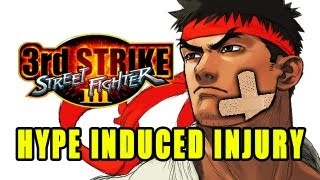 For the 35th time, Maximilian has fired up his console and PC to play and talk about Street Fighter III: 3rd Strike. Watch the latest "Online Warrior" episode inside.

In a crowded fighting game market, it can be difficult to appeal to everyone. There are a ton of fighters out there from Blazblue to Ultimate Marvel vs. Capcom 3. The market is filled with fisticuffs.

Above almost all, the one that appeals to Maximilian is a game originally released in 1999. That one fighting game title is Street Fighter III: 3rd Strike. Since the game made its comeback in 2011 on Xbox Live and PSN, Max has been grinding in online ranked matches.

He has posted the 35th episode of the 3rd Strike edition of his "Online Warrior" series. The episode is dubbed, "Hype Induced Injury."