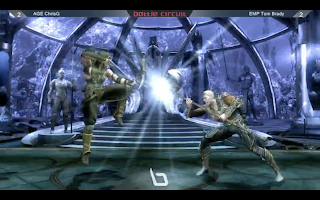 Injustice: Gods Among Us made its Battle Circuit debut last night and it finished with a game that went down to the wire. See the results from the event inside.

Battle Circuit 16 has reached its conclusion. The event took place at Next Level in Brooklyn, NY last night (April 24). While the usual titles were played, a new game surfaced. Injustice: Gods Among Us made its long anticipated debut at the tournament event.

Players that are highly regarded in the fighting game community attended Battle Circuit 16. Chris G, Dragongod, Tom Brady, Arturo "TS Sabin" Sanchez and Flux are just some of the competitors who participated.

In the finals of Injustice, Chris G and Tom Brady squared off. The two would become tied 2-2 in a winner takes first place match-up. Which one of them would be crowned the first Battle Circuit champion of Injustice?

Here are the results (via Challonge).