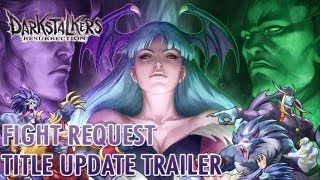 Capcom isn't giving up on Darkstalkers Resurrection just yet. The company has released a trailer for the game's patch.

Darkstalkers may not be dead but they could be on life support.

Capcom hasn't been shy about letting fans know of the disappointing sales Darkstalkers Resurrection brought in. The company's vice president Christian Svensson blamed the shortcoming on misread information. Whatever the causes are, things are not looking good for the Darkstalkers franchise.

Nevertheless, Capcom is still pushing forward with promotion for the compilation. They have released a trailer for the new patch that adds Fight Request to the Arcade and Training modes. The patch is available on PSN and Xbox Live.