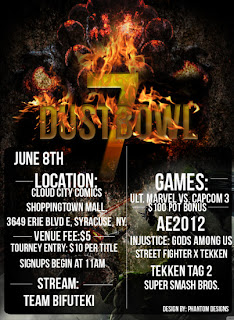 Upstate New York will be the home of Dustbowl 7. Find out what games will be there, who is streaming and other details inside.

The seventh Dustbowl tournament event is set. Dustbowl 7 will take place at Cloud City Comics & Toys in Syracuse, NY on June 8. The venue fee is $5, while the tournament fee is $10 per title. Signups begin at 11 a.m. ET.

Damus took to the SRK forums to let loose on the details of the festivities. Tidbits such as game lineup and stream provider have been revealed.

Bifuteki will be in charge of streaming duties. FightVG.com will post the live stream before it airs. We'll also get you up to speed on a schedule if one is released.
Posted by Fernando Quiles Jr.