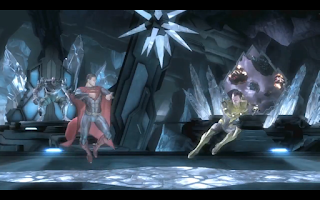 It's Friday, which means the fourth Injustice: Gods Among Us Battle Arena results have been revealed. Find out who emerged victorious in the Superman vs. Sinestro and Green Arrow vs. Hawkgirl match-ups.

The final match-ups for round one of the Injustice: Gods Among Us Battle Arena have concluded. Superman took on Sinestro, while Green Arrow battled Hawkgirl.

Results of the fourth Battle Arena have been posted by InjusticeGame. The polls opened on Monday (Feb. 25) and fans were able to decide who'd stand tall in each bout.

Who did the people choose? Find out below.