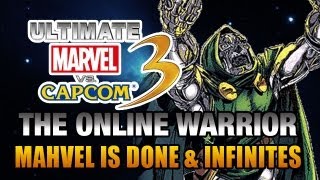 Is this truly the end for Ultimate Marvel vs. Capcom 3? Maximilian throws his two cents on the bleak future of the crossover as well as his ability to pull off a Doctor Doom infinite in training.


Episode 24 of season two of the Ultimate Marvel vs. Capcom 3 (UMvC3) "Online Warrior" is here. Maximilian decides to discuss the lack of updates UMvC3 has received and the likelihood that the game is dead as far as patches and new characters go. He also talks about the difficulty of pulling off infinites in an online environment.
Posted by Fernando Quiles Jr.