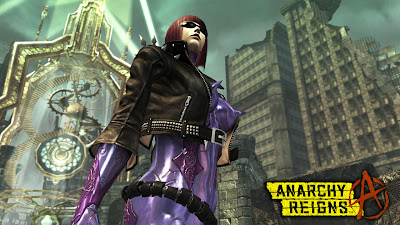 Anarchy Reigns is coming tomorrow. There's been a lot of controversy with the game being released first in Japan back in the summer of 2012 but don't let that deter you. Here are five reasons why you should unleash Anarchy tomorrow.

The Sega and Platinum Games marriage has come to an end. Luckily for us, Anarchy Reigns is their parting gift. Tomorrow (Jan. 8) the game will hit North America for PS3 and Xbox 360. It took half a year to get the game officially released outside of Japan but all is forgiven.

Anarchy Reigns has a bevy of modes both online and offline that you can sink your teeth into. You'll be spending most of your time in multiplayer but with a story mode and training, allowing you to practice your combos, offline holds its own as well. You can also spend your time either online or offline unlocking various characters.

Having played the import, I can say that Anarchy Reigns delivers. It may have been difficult to find a match since it was only available to Japanese gamers (and a few importers), however the experience was nothing short of enjoyable. From the stuns, to the tech grabs, to the stage hazards, to Rampage mode, this game will have you on your toes at all times.

Here are five reasons why Anarchy Reigns deserves your money.

This is chaos at its finest. No matter what stage you play on, you can get hit with something out of the blue. Not only do you have to worry about your opponents but you also have to watch out for explosions and stage bosses such as the Cthulu.

You can also pick up objects such as cars, tires, and poles which you can hurl at your opponents. These can cause a knockdown or stun depending on which item you use. There are also some weapons you can pick up such as the sniper rifle. One shot in the sweet spot and your opponent will drop. This adds an element that you won't see in other fighting games. Sure you can use items in Super Smash Bros. and PlayStation All-Stars, but you're not given as much freedom roaming around in those games as you are in Anarchy Reigns.

4. A Simple yet Effective Tutorial

The tutorial mode in Anarachy Reigns should make causal gamers feel comfortable. This mode takes you through the gameplay mechanics step by step to ensure you are ready for combat. It may not sound like a strong suit to hardcore fighting game enthusiasts but to those who want to pick up the game and learn basic techniques quickly, this is very helpful.

Some might argue the game itself is simple enough so a tutorial isn't ideal. Anytime a new game hits the market a strong and simple tutorial system should be in place so you don't lose the impatient gamer. Be honest, how many causal fans do you think turned away from Street Fighter IV's online modes when they heard of "FADC?"

Music during gameplay seems to be a lost art. Hearing explosions and gun shots in your typical first person shooter gets dull and silent after your first match. With the deathmatches in Anarchy Reigns you don't have to settle for silence. Platinum Games did a fantastic job getting rappers such as Skitz the Samurida, Josh Clemons, Doujah Raze, and many more for the soundtrack.

The production work on these songs are also a thing of beauty and fits the game extremely well. Every song is made with the goal of keeping the gamer's heart racing and desire burning. If you have a gaming headset such as the Trittons or Turtle Beaches, get ready to feel the urge to destroy.


FightVG's own Miguel Munoz took Mathilda and made a 100-percent combo video on Christmas day. This is the havoc you can wreck in Anarchy Reigns. The game may sound simple enough with the face buttons used to attack, jump, and grab but there's more to the combat system than meets the eye.

If you button mash, chances are you'll get yourself stunned or trigger a 360 attack, which reduces your health. If you choose your spots wisely and pick the right abilities for your character such as lean extender, you'll have a better understanding of how the game works. Evading and knowing when to use Rampage mode is also crucial. Using Rampage against a player without it can lead to an easy kill should your opponent get caught in the barrage of punches.

If a product isn't good quality and doesn't provide a decent amount of content, then it doesn't matter how low the price is because people won't buy it. Anarchy Reigns is a quality game with some good content and a deep combat system. At launch, the game will be $29.99. It's rare to find games like this in the console market for that low of a price. Perhaps the only place where you can find deals this good are on PC Gaming through Steam.

Anarchy Reigns isn't perfect. The netplay can get a little wonky at times and with 16 characters (17 if you count the Bayonetta pre-order) the game doesn't exactly have a beefy roster. Having said that, I haven't even touched on the various online modes such as Tag Team, Battle Royale, Capture the Flag and a slew of others. At $29.99, you can't go wrong with Anarchy Reigns.

Don't forget to catch us on Twitch.TV/FightVG tomorrow as we will stream Anarchy Reigns live on launch day. Like us on Facebook.com/FightVG and follow us on Twitter.com/FightVG where we'll let you know when the stream starts.
Posted by Fernando Quiles Jr.