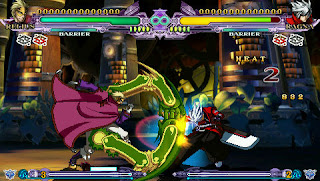 Blazblue is on PS Vita.

The producer of Blazblue Continuum Shift: Extend (BBCS:EX), Toshimichi Mori spoke with Rocket Chainsaw to promote the PS Vita version. Mori discussed what makes the handheld stand out from the consoles.

See what he had to say below:

Brad: How do you find the touch controls on the rear of the Vita have changed the way Blazblue works?

Mori: I’m not a big fan of ‘easy specials’ that you often find in fighting games – we have implemented ‘Stylish Mode’ for this entry-level style gameplay. When we approached the back touch panel we wanted to do something different. For this we wanted to emulate the ‘hitbox’ it’s a kind of super-hardcore arcade stick than only has buttons – so all inputs are tapped in. While this set up requires much practice – with patience, you can execute moves much faster than you ever could with a stick.

Mori: People often complain about the controls on handhelds for fighters. I think everyone agrees that the Vita D-Pad is very good – and well suited to fighting games, so that difference is no longer a problem. The Vita’s screen is also beautiful, and the smaller size, in some ways, makes BlazBlue look even sharper – even more colourful. People who own both versions can play story mode on the move and then transfer their saves to their PS3 when they get home.