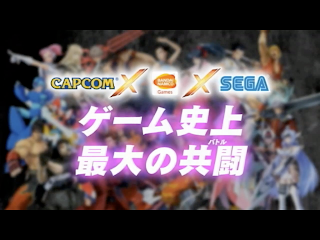 The next title in Namco's X series is coming.

Namco Bandai has teamed up with Capcom and Sega to deliver a strategy RPG titled, Project X Zone. The game will be released in Japan on the 3DS sometime this year. No word on if the game will make its way to the United States.

The first trailer of the game has been released and it showcases a slew of fighting game characters. Ryu and Ken from Street Fighter. Mega Man, Zero, Jill, Chris, and Dante from the Marvel vs. Capcom series. Demitri from Darkstalkers. Jin and Xiaoyu from Tekken. Akira and Pai Chan from Virtua Fighter.

Watch the trailer below: