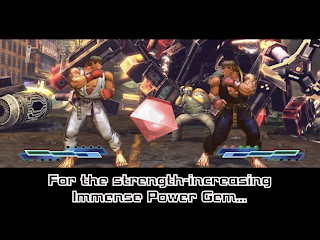 Capcom has revealed on their Japanese blog (via Event Hubs) that they will be releasing a free update on April 24 on Xbox Live and PSN. The update will come with 60 gems and a replay analyzer.

Of the gems, Pandora Extend, Ultimate Guard, and Expert Input are perhaps the most notable. The Pandora gem will extend the mode to 20 seconds. Ultimate Guard enables the player to auto block, auto throw escape, and take less chip damage at the expense of one bar of meter.

No word on if the analog input glitch on Xbox 360 will be fixed with this update.
Posted by Fernando Quiles Jr.