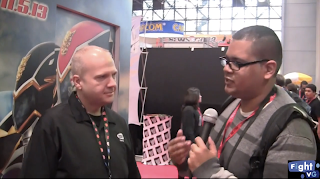 Namco Bandai's Jason Enos spoke with FightVG on their upcoming anime fighting game titles. Get the interview inside.

Enos believes Battle of Z, releasing in early 2014, will be a unique experience compared to previous Dragon Ball Z (DBZ) titles. With emphasis on team battles, Enos feels it gives players the opportunity for more interaction with their teammates and opponents.

"In the past Dragon Ball Z has always been traditionally a fighting style game, but most of it has been based around one-on-one fighting and this time around we're going to focus on team battles, so you and three of your friends get together (and) form your ultimate DBZ team and then you can go online and take on other DBZ teams around the world, which is going to be very cool. It also allows you to really get all of that interaction with all the characters on the screen at the same time, which is also pretty cool."

Diehard fans of the DBZ: Budokai series have been critical of Namco Bandai's recent DBZ offerings. While not everyone can be satisfied, Enos says the early response to Battle of Z has been positive.

"Whenever you've got something that's been around as long as Dragon Ball has, almost 30 years now, there's obviously going to be a lot of devout, loyal fans and it's one of those things where it's so difficult to please everybody. You just kind of have to accept the fact that you're not going to be able to please everyone, but we've been to a lot of different shows over the past couple of months talking a little bit more about the new game and the fans have been responding really positively to the ideas and we're doing some pretty cool things with the game. Can't please everyone but we'll do the best we can."

In terms of using elements from the DBZ franchise in Battle of Z, Namco Bandai is taking content from the animated movie, Battle of Gods, as well as incorporating storylines in the game.

"Some of the stuff we haven't really talked about yet, but we've got some stuff from the new animated film, Battle of Gods, so there's actually some content in the game from the new movie. We're definitely trying different things to appeal to the fans, the game's going to follow the storyline of DBZ but we have a lot of those exciting 'what if?' scenarios that a lot of the fans really like too."

"For Full Burst, it's a great opportunity if you haven't already picked up (Ultimate Ninja) Storm 3, this is definitely the version to get. You're going to get basically all of (Ultimate Ninja) Storm 3, new updated cinematics, 100 new missions, brand new chapter that wasn't in the game, you get almost all of the DLC costumes except for the Goku and Hello Kitty, but it's definitely the Ultimate Ninja Storm 3 version, but we also know that a lot of fans already have (the original game), so one of the things that we're doing is when the game comes out we're releasing a DLC upgrade, so if you already have Storm 3 and you don't want to go out and buy Full Burst, you can just get the DLC upgrade, which gives you all of the Full Burst content."

CyberConnect2 is the developer of Ultimate Ninja Storm 3. Enos says the developer has gone the extra mile to stay true to the Naruto series as well as making sure the game is clean and well polished before release day.

"Naruto Ultimate Ninja Storm series has been critically acclaimed series and the fans have really loved it and CyberConnect2, the developer on the game, there's such huge passionate fans of Naruto, so every game that they put out in the Storm series is almost entirely fan service, they really spend the extra roll the sleeves up to put all the nice polish in the game and all the nice touches that the fans really appreciate."

Following the success of Saint Seiya in Japan, Europe, Latin America and South America, Namco Bandai saw an opportunity to release a PS3 title of the series in North America. Enos believes Saint Seiya: Brave Soldiers has the potential to do well in the United States.

"The (Saint Seiya) manga was originally made in the mid 80s and it did go on and became an anime, it was on TV and in particular, it was big in Japan, it also got very big in Europe especially in France and then in Latin America and South America, they also started airing the anime. Those areas it's huge, they are so into it like here we're so into Dragon Ball and Naruto, it's that big. We announced at Anime Expo that we were going to bring the newest Saint Seiya game to Latin America and South America, nothing about North America it was just there. When I was at Anime Expo, I had about 12 or so people come up to me saying, 'Hey are you going to bring Saint Seiya here?' At the time we hadn't really thought about it, so at San Diego Comic-Con we actually announced that, 'What the hell?' so we're actually going to bring it here as a digital title for PSN."

As far as gameplay goes, Enos feels the title is a fun fighting game and that fans of the series will appreciate the effort put into it.

"It's a really fun fighting game. Saint Seiya, the general mythos of the anime is that it's kind of based on Greek mythology, so there's these saints and they all represent gods of Greek mythology and it's got a very long storyline, protecting Athena, there's lots of really cool stuff in there and it's all tied to the zodiac as well, so it's got a lot of stuff that would definitely translate here, it's just it never really got on TV and took off, so we're really excited to bring it here just to see what the anime fans think but the game itself is really solid, it's a really fun game."