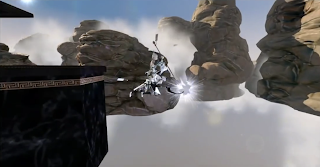 Air Dash Online has landed on Kickstarter. Get the link inside.

JV5 has launched the Kickstarter campaign for Air Dash Online. The project needs $355,555 to reach its goal. You can back the project by clicking here.

A new Kickstarter page means more information has been revealed on the upcoming PC, Mac and Linux fighter. An offline alpha release is expected for Jan. 2014, the beta in June and the full game in Nov.

Air Dash Online is heavily inspired by the Super Smash Bros. series as well as Guilty Gear and even the Dragon Ball Z anime.
Posted by Fernando Quiles Jr.