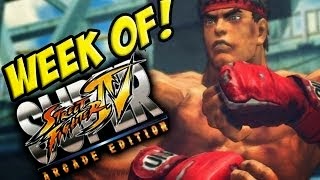 The second and third parts to Maximilian's "WEEK OF!" Super Street Fighter IV: Arcade Edition 2012 (AE 2012) and Street Fighter III: 3rd Strike have surfaced. Max is using both games to brush up on some online rust this week.

With AE 2012, Max says he plans to get some competition in before Ultra Street Fighter IV is released. When it comes to 3rd Strike, Max is familiar with the title and often times has success online.

If you missed the first part for both fighters, click here. Below are parts two and three for AE 2012 and 3rd Strike.