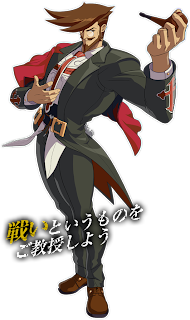 Add another one to the Guilty Gear Xrd -SIGN- roster. Making his return will be Slayer.

Arc System Works has revealed Slayer will be a playable character in Guilty Gear Xrd -SIGN-. The announcement comes shortly after Faust's playability was confirmed.

Slayer made his debut in the Guilty Gear series back in 2002. The game where he made his entrance was Guilty Gear XX. Fans in North America couldn't play as the character until 2003, as that's when the game was released stateside.

Below is the move-list for Slayer.