NYCC 2013: For first-time Ryu cosplayer, it's about having fun and 'enjoying it all' 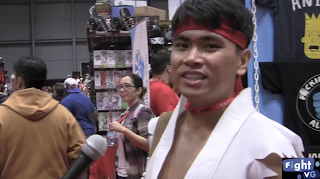 FightVG has interviewed a slew of cosplayers at the New York Comic-Con 2013. One of them happened to don Ryu's attire in his first act ever. Find out what he told us about the experience inside.

That's what first-time cosplayer Jon (or John) joked about regarding wearing flip flops for his Ryu attire at the 2013 New York Comic-Con event. He explained that he wanted to ease his way into cosplaying and that his look resembled Ryu closely enough that it could be pulled off.

"I figured it was easiest for me to get the Ryu look, it was very easy, I've got dark hair, I could definitely pull it off, I worked out enough."

He isn't one to simply pick any random popular character out of the hat and run with it. Jon (or John) has had experience with Street Fighter games. While he doesn't believe he's got the skills to compete against the best, he's a fan of the series.

Many cosplayers are hard at work to master their craft and make sure the world knows of their talents. As a result, they will take opportunities to promote their works to the media and rightfully so. While he was given the opportunity to do that, Jon (or John) just wants to have fun with it.

"I'm actually here just for the fun of it. I'm enjoying it all, taking it all in."