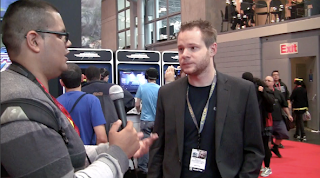 Capcom showcased some of their upcoming titles such as Strider at the 2013 New York Comic-Con. While fighting games weren't as prominent at the event as they were last year, FightVG was able to get some thoughts from Capcom on the future of their fighters.

FightVG was able to get a hold of Capcom's Matt Dahlgren, who shared his thoughts on Ultra Street Fighter IV's progress, an Ultimate Marvel vs. Capcom 3 (UMvC3) update and the fighting game community (FGC). Starting with Ultra, Dahlgren seems pleased with how things are going.

"Ultra is coming along very well. We're actually not showcasing (a playable demo) here. We don't have any new information to share as of yet, but stay tuned in the following months, there will definitely be some more news coming out."

As far as when and where the first playable demo will be available, Dahlgren could not give a definitive answer. He was, however able to share that the game will be playable at the Capcom Cup in December.

"We don't have any information on where the first playable demo is going to be, I know it will definitely be at the Capcom Cup later this year in December, hopefully we'll have some opportunities before that. It may not be the first, when we don't have plans finalized I don't want to give a specific date or it might fall through, but we are trying to get that out there very soon."

One question that Capcom can't seem to escape is, "Will there be a UMvC3 update?" While the answer has always been the same, "it's not in our plans right now," Dahlgren admitted that it would excite him. Despite an update not being in the works, Capcom remains supportive of the community.

"I love Marvel vs. Capcom 3, I think the scene is doing very great and it would be wonderful to have an update. Unfortunately we've said multiple times, it's not in the cards right now, there's various reasons as to why that is like development resources, but we are still big fans of the game and still helping to support the tournament scene. (Ultimate) Marvel vs. Capcom 3 is going to be at the Capcom Cup this year. I wish I had more to share, but that's the situation as it is."

Dahlgren is no stranger to the FGC. Having been involved with the FGC for a decent amount of time, Dahlgren is pleased with the growth of competitive players in fighting games. He believes the FGC can reach even greater heights.

"I've been a part of the fighting game community for a long time, I'm very happy to see how it's grown. I think we can see even more growth from here on out, I think this is just the beginning, so I would definitely like to see some more advancements within the community."