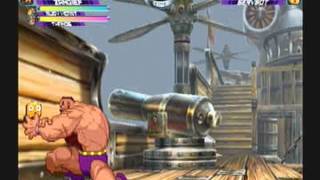 When you think of Marvel vs. Capcom 2 combos, there's probably one enthusiast that stands out in your mind. If that person is BrettH123 aka "Romneto," then that's no surprise. Here's a new one from the staunch fighting game community member.

Marvel vs. Capcom 2 (MvC2) burst into Arcades and Sega Dreamcast in 2000. PS2 and Xbox ports soon followed. The game left such an impact that it was later re-released on Xbox Live and PSN in 2009 with online play for each version. Even iOS devices received the title in spring 2012.

With its legacy and multiple ports in tact, many wondered how its longevity would fare. You can release a game several times, but mother time waits for no one. As the market changes, so do the direction of the consumers. How could MvC2 survive in 2013?

BrettH123 has never strayed away from MvC2. The combo enthusiast stays active with the game by providing proof of concept combos. Whenever a new one is posted from the combo goer also known as "Romneto," it's probably a safe bet that it'll be a touch of death.

The latest offering is no exception.