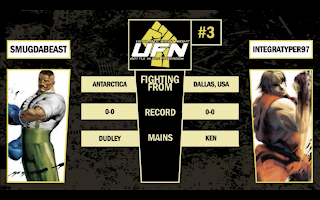 In a battle of Dudley (Smug da Beast) and Ken (IntegraTypeR97), a blowout wasn't likely. That theory was proven to be correct ... sort of. These two competitors had quite a fracas. Smug da Beast took games two, three, five, six, and seven while IntegraTypeR97 won games one and four.

Both players made their UFN debuts tonight (Oct. 1). Someone's record had to be blemished and it IntegraTypeR97's who took the 5-2 loss.

So what's next for the winner and loser?

Smug da Beast has a mean Dudley. When faced with adversity, he's still able to find a way to win much like GOL TOI504. His win is even more impressive since he stepped up on short notice. I imagine he returns to UFN in the future and potentially meets LiquidSRK in a mirror match.

IntegraTypeR97 has been known to drop in on PandaxGaming's Endless Battle streams. A UFN return is likely as I doubt he wants to stay 0-1 for long.

Who says the underdog is dead meat?
Posted by Fernando Quiles Jr.