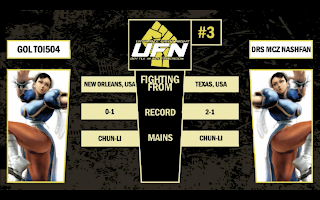 This match had everything from footsie challenges to rushdowns to throws but in the end TOI504 took the match 5-3. TOI504 took games one, three, five, seven, and eight. Nashfan earned games two, four, and six.

What does this mean for the futures of these two top Chun-Li players?

TOI504 improves his UFN record to 1-1. Nashfan gets bumped down to 2-2. The good news for Nashfan is he took the match-up on short notice.  Like his opponent, Nashfan responded well to his losses and would come back strong. Another UFN appearance would come as little surprise.

As for TOI504, he gets his first win in UFN action and does it in style. His grit and determination ended up being the difference. His Chun-Li poses a problem to top competition.

It's likely TOI will be challenged by BrolyLegs at a future UFN event.
Posted by Fernando Quiles Jr.