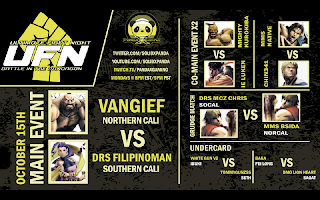 UFN 4 took place last night (Oct. 15) and was streamed by PandaxGaming. Top players such as Filipinoman, Vangief, LionHeart, and more competed. Native Impact was originally set to meet Chin341, but the match-up was canceled.

There was a ton of hype surrounding the bi-weekly event as the main event was NorCal's Vangief vs. SoCal's Filipinoman. DMG's LionHeart was also in action, but his match-up was hit with a last minute change as his original opponent Baka was forced off the card. Ace Kombat served as a replacement.

Peep the UFN 4 results below.

The event began in bizarre fashion. DRS MCZ Chris met MMS BSIDA in a Ken mirror match that opened the show. Chris took the first three games and then things took a turn for the strange. BSIDA left the lobby after the third game. This counted as a forfeit since UFN matches use a first to five format.

UFN 4's bizarre moments didn't stop at the first bout of the evening. TommyGunzss was advertised to use Seth to face White Gun v2's Ibuki. TommyGunzss pulled a stunt and used Gen in the first game of the set. This did not sit well with the event organizer PandaxGaming. TommyGunzss quickly switched back to Seth but he came up short in a 3-5 loss.

Mighty Kurokiba was a heavy favorite going into his set against IE Luken. Kurokiba used Dee Jay while Luken played as Ryu. Luken almost made a dramatic comeback after being down three games. In the end, Kurokiba hung on for a 5-4 victory.

LionHeart faced Ace Kombat in the co-main event. LionHeart's spacing proved to be too much for Ace Kombat's Ryu. Ace Kombat was only able to win one game. LionHeart took the set 5-1.

Arguably the most anticipated main event UFN has ever had, Filipinoman met Vangief. Rose was Filipinoman's main, while Vangief of course used Zangief. While many anticipated this match to be competitive, that's not what we got. Instead, Filipinoman swept Vangief 5-0.