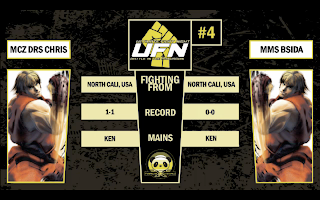 The Ken grudge mirror match has concluded in bizarre fashion.

MCZ DRS Chris and MMS BSIDA battled to determine who on this night (Oct. 15) was the better Ken player. The match kicked off the fourth Ultimate Fight Night (UFN) event.

Chris took games one, two, and three. BSIDA left the lobby after the third game and did not return. Since UFN events are done in a first to five format, BSIDA's loss is considered a forfeit.

What's next for the winner and loser of this grudge match?

Chris improves to 2-1 with this win although he probably isn't happy with the abrupt end. He has been on a roll, trying to prove to the world that his Ken is dominate. Look for him to return to a UFN event sooner than later.

BSIDA's sudden forfeit doesn't bode well for his UFN future. He falls short in his debut, making his record 0-1 at the event. The loss will not win him any fans in the fighting game community (FGC). It was a disappointing end to an anticipated match-up.
Posted by Fernando Quiles Jr.