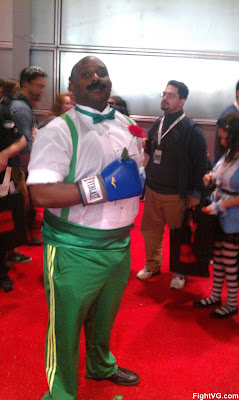 The weekend of all weekends has ended.

New York Comic-Con (NYCC) 2012 took place at the Jacob Javits Center in Manhattan from Oct. 11-14. The event saw panels, autograph and photo sessions, movies, and cosplayers. Many video game companies took to the event to showcase their upcoming products.

On the fighting game side, Capcom, Namco Bandai, SuperBot, and NetherRealm put their latest efforts on display. Demos of PlayStation All-Stars Battle Royale, Injustice: Gods Among Us, DarkStalkers Resurrection, and more were tested by the massive turnout at NYCC 2012.

Head past the jump to see notes and highlights from each day of NYCC 2012.

- Capcom reveals Darkstalkers Resurrection. This will feature Darkstalkers 1 and 3 with modern features. The download will be available on XBLA and PSN next year.

- Yoshinori Ono announces Street Fighter x Tekken 2013. The update will be free and available for Xbox 360, PS3, PC, and PS Vita in December.

- A trailer titled, "Darkstalkers Are Not Dead" showcased a Street Fighter IV graphic style, teasing a new entry in the series.

- Injustice: Gods Among Us plays like MK9. There are some framerate issues in the early build, especially when it comes to supers. Green Arrow is a zoning character as expected.

- IGN has posted footage of CD Jr versus a NetherRealm employee in Injustice.

- An SFxT PS Vita trailer has been released.

- Derek Neal tells Joystiq that the "Darkstalkers Are Not Dead" teaser is a step closer to a fourth game.

- The PlayStation All-Stars Battle Royale demo ran smooth. There were four setups. Two utilized the PS Vita version cross-play, while one had four PS3 controllers and the other couldn't get the PS Vita handheld running.

- Capcom had an HDTV showing a live feed of the Street Fighter 25th Anniversary tournament in Brazil.

- Gameplay footage of Nightwing versus Green Arrow has been uploaded.

- Yoshinori Ono says Darkstalkers Resurrection will not see a Japanese release. Capcom responded to this by saying the game has yet to be announced (via Beast Note).
Posted by Fernando Quiles Jr.