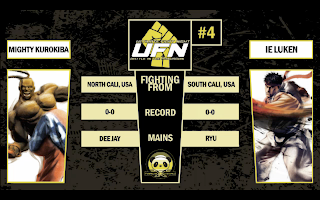 Despite some scares, Mighty Kurokiba did what many expected him to do against IE Luken ... win at UFN 4.

Mighty Kurokiba earned games three, four, five, six, and nine. Luken gained control in games one, two, seven, and eight but wasn't able to pull off a victory. Luken was down by three games before turning things around in a comeback run. He takes the 4-5 loss.

Due to connection issues, PandaxGaming filled in for FREEJ4Y on commentary. FREEJ4Y had predicted a 5-2 victory for Mighty Kurokiba.

Kurokiba almost folded under Luken's pressure, but he was able to maintain his composure to make a successful UFN debut. There were times where it looked like he was reading his opponent's mind, predicting jump ins. He'll look to get on a hot streak at UFN events.

Patience should be a virtue to Luken. His Ryu was game and almost made a huge comeback. The jump ins were the problem as Kurokiba knew when Luken was going for them almost all the time. In a battle of NorCal vs. SoCal, NorCal prevailed, but Luken shouldn't feel like a loser tonight.
Posted by Fernando Quiles Jr.