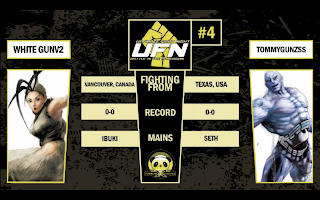 The second UFN match-up of the night has wrapped up and like the first bout of the card, it was not without controversy. PandaxGaming advertised a Seth versus Ibuki match-up. Much to the dismay of the event organizer, TommyGunzss used Gen in the first game of the set.

After receiving backlash from the commentators, PandaxGaming, and stream viewers, TommyGunzss switched back to Seth. Unfortunately for him, it was too little too late as White Gun v2 took the set 5-3.

White Gun v2 took games one, two, three, seven, and eight, while TommyGunzss took games four, five, six. Both competitors were swinging for the fences but by the end of the battle, White Gun v2 was a tad more technical.

While White Gun v2 should enjoy his win for now, the Canadian has a lot of work to do. His Ibuki has solid offense but is susceptible to attacks. Nonetheless this was a solid UFN debut.

TommyGunzss may not be allowed to return to UFN for quite some time after that stunt in the first game. PandaxGaming takes his events seriously and doesn't appreciate the trolling attempt. Here's to hoping that cooler heads prevail and we see TommyGunzss return sooner than later.
Posted by Fernando Quiles Jr.