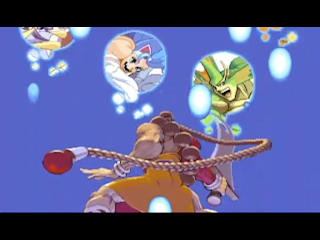 Capcom's Yoshinori Ono has proven the rumor starters right ... sort of. He took to New York Comic-Con 2012 to announce Darkstalkers Resurrection. The bundle will contain the first and third main games of the series.

Derek Neal will serve as the game's producer. It will be released as a download on the Xbox Live Marketplace and PSN Store for 1600 Microsoft Points and $14.99, respectively.

See the features included (via Polygon), after the jump.

Fernando's POV: Some fans may not be happy about this since it's not a new title, but fans should take this as a good sign for the future of the series. If enough gamers support Resurrection, then we may see a new Darkstalkers entry sooner than later.
Posted by Fernando Quiles Jr.