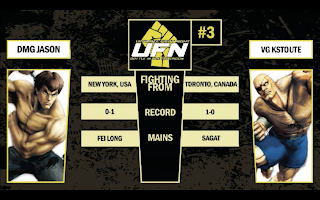 Something had to give.

Kstoute failed to get the last laugh. The grudge match did not live up to the hype as Jason snagged all five games. Kstoute was unable to find his spacing and was shut out.

Did Jason get inside his opponent's mind?

Something inside Jason knew the better man didn't win when he first played Kstoute on PandaxGaming's stream. He let it be known on Twitter and got his chance to take out the Sagat "masher." He improves to 1-1 in UFN.

As for Kstoute, he moves down to 1-1 and the match-up did not help remove Jason's doubts. He should go back to the drawing board and play the way he knows how to. This may have been a blowout but Kstoute is not one to run away from the action.

Look for him to bounce back in a big way.
Posted by Fernando Quiles Jr.