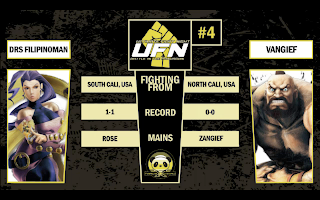 The main event of UFN 4 has ended and it wasn't even close.

DRS Filipinoman used Rose to meet Vangief, who played as Zangief. The match-up was highly anticipated. Many felt the set would be down to the wire, but that wasn't the case. Filipinoman earned all five games. Vangief suffered a shutout in his UFN debut.

Aquasilk replaced FREEJ4Y to serve as a guest commentator. "Silky Smooth" believed Vangief was experiencing some lag issues due to dropped combos. The sweep came as a surprise to iRedman and Aquasilk.

Filipinoman looked unstoppable. This was clearly the shocker of the night. He anticipated everything and left the commentators speechless when the set quickly ended. Filipinoman did what he wanted to do in the entire set.

Vangief probably won't let the loss deter him as this was an online set with yellow bars on both players. Reactions are known to be negatively impacted by online lag.
Posted by Fernando Quiles Jr.