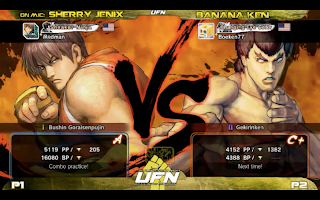 iRedman was able to take games one, two, five, and seven in his 4-5 defeat. Baka took games three, four, six, eight, and nine. It was all out offense in this one, folks.

iRedman was once a mystery to many competitive players. Those days are over. Once Baka found his foes' timing, the match-up was in his hands, but barely. iRedman was unable to find a way to adjust in the final moments and it proved to be costly.

After showing what he can do to the world, it would probably be in iRedman's best interest to work on being less predictable in training. He took this match-up on short notice but he did have issues when he was being pressured. If he settles down and keeps his head in the game, he can take his skills to a higher level.

No matter what, UFN can always count on iRedman to step up when he's needed as well as deliver solid commentary.
Posted by Fernando Quiles Jr.