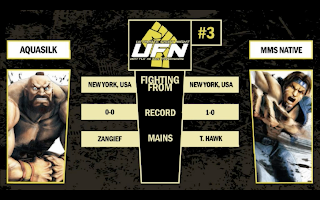 When Aquasilk's Zangief match-up with Native Impact's T. Hawk was announced, a display of grappling was inevitable. That's exactly what we got tonight (Oct. 1) at UFN 3. Aquasilk looked to make a successful UFN debut but did he?

Native Impact found success in games one, two, five, six, and seven in his 5-2 victory. Aquasilk hit his stride in games three and four.

But it wasn't enough.

For Native Impact's T. Hawk, the name of the game was distance. His ability to stay away from Zangief to avoid his grabs proved to be the difference maker. Native Impact improves his UFN record to 2-0.

Aquasilk did what he could to close the distance on T. Hawk but the standing roundhouse kick was too much for "Silky Smooth." It'll be interesting to see if the Big Two local will return to UFN but if he does look for him to pull out all the stops.

This was the main event of UFN 3 in an event that had five matches. Look for replays to be posted in the near future from PandaxGaming.
Posted by Fernando Quiles Jr.