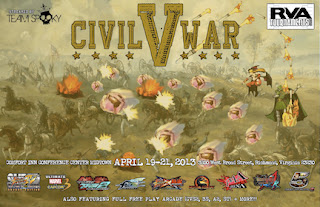 The fighting game community is getting another dose of major tournament action following Texas Showdown 2013. Get the details on Civil War V, which is set for next weekend.

It's almost time to ditch the textbooks and witness a war first hand.

Civil War V takes place at the Comfort Inn Midtown Conference Center in Richmond, VA. The event beings next Friday (April 19). This is just one week after Texas Showdown 2013.

Renegade took to the SRK forums to post the formalities. There is still time to register and you can do so by clicking here. Those who pre-register get benefits such as skill based and regional based seeding and door prizes.

Team Sp00ky will be at the helm to stream Civil War V. As always with Team Sp00ky streams, commentators will vary depending on the game being aired. Secondary streams are also expected. FightVG.com will post all the live streams when they air.

Below is the game lineup and the consoles they will be played on.

Injustice: Gods Among Us (Playstation 3)


The tentative schedule is as follows: