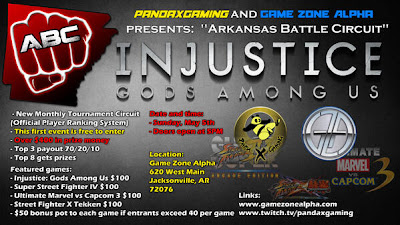 PandaxGaming is making a statement in the fighting game community. Not only do they host the most consistent Street Fighter IV stream, but they will be hosting a big tournament event with Game Zone Alpha next month.

Arkansas is getting some tournament love.

PandaxGaming will be hosting Arkansas Battle Circuit at Game Zone Alpha in Jacksonville, AR on May 5. The games featured will be Injustice: Gods Among Us, Super Street Fighter IV: Arcade Edition 2012, Street Fighter x Tekken 2013 and Ultimate Marvel vs. Capcom 3.

Arkansas Battle Circuit will become a monthly tournament. The series will have an official player ranking system. For the first event, entry is free and the top eight players will receive prizes.

FightVG.com will post the live stream when it airs.
Posted by Fernando Quiles Jr.