Maximilian's Batman combos for Injustice: Gods Among Us 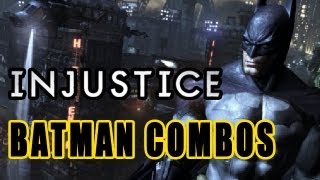 Look out online warriors, Maximilian may have your numbers already. With the demo to Injustice: Gods Among Us released, Max has already taken Batman to the lab and has done some impressive combo work.

Perhaps that Mortal Kombat 9 (MK9) training has paid off.

Today (April 2) the demo for Injustice: Gods Among Us was released on Xbox Live and PSN. Maximilian wasted little time diving into the sneak preview of the NetherRealm fighter set for an April 16 release.

Despite being a novice at MK9 and just getting hold of the Injustice demo, Max seems to be catching on quick. The popular fighting game enthusiast dishes out some damaging combos. He even makes use of the interactive stage environments.