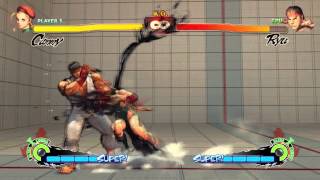 Want to see what Capcom has in store for Cammy in the next Super Street Fighter IV update? Peep inside to get a sneak peak.

Cammy has been the center of controversy since the Super Street Fighter IV: Arcade Edition 2012 (AE 2012) update was released. Her safe options and favorable matches have had the fighting game community crying foul.

But have no fear AE enthusiasts. We now have a sneak peek at the changes coming Cammy's way thanks to RedmageFoxx. See the balance changes below.

NOTE: You may want to look at the date this article was posted before jumping for joy like Sakura or raging harder than Akuma.
Posted by Fernando Quiles Jr.